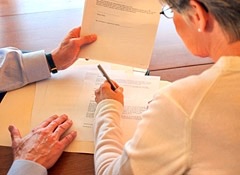 For doctors like me, and anyone who has been at the bedside of a dying person, end-of-life planning can make at least some order out of chaos. And such planning appears to be gaining acceptance, according to a report issued this month by the Centers for Disease Control and Prevention. It found that nearly two-thirds of nursing home patients, 28 percent of home health-care patients, and 5 to 15 percent of healthy adults now have living wills or other advanced directives.

That’s why I’m perplexed by all the controversy over President Obama’s attempts to make end-of-life planning part of routine patient care. After much back and forth, last week the administration again decided to back away from the measure, presumably to avoid an outcry from the same people who had previously claimed, wrongly, that it would somehow amount to government run “death panels” that decide who among the very ill gets to live.

I learned my lesson long ago as a young internist called to the emergency room to see the 85-year-old father of a patient of mine, who had traveled from Florida to visit his daughter.